I bought a fixer-upper house in 1980 in east Hollywood right next to Doctor Fleiss’ office. He had an old bungalow on a corner where he did his pediatric medical stuff . He had a great reputation ; he was very highly respected pediatrician in the neighborhood and , I think , in the medical community .

In the mid-eighties the young Armenians in the area started to organize into gangs . Two young Armenian guys lived right across the street from me . The older one wanted to work his way up in the gang , I guess . His group used to congregate at night in Doctor Fleiss’ parking lot , which was next to my front lawn .

I talked to the wannabe gangster across the street a few times about the noise problem . It became clear that he wasn’t about to stand up to the others .  Soon , anyway , his family moved out of the house . Maybe the parents wanted a safer place for their boys . But the gang continued to use Doctor Fleiss’  lot to park their cars  , party , play their loud music , and , generally , act like assholes .

Fleiss had a low concrete wall on that side of his property . He had a heavy steel chain ready to be strung across the entry to his parking lot . I think that that chain could have simply ended the problem  . All he had to do was to stretch it and lock it . He never did , though .

After a few weeks of this loud nightly activity the Armenians began tagging . Doctor Fleiss’ low concrete wall was spray painted with Armenian gang signs and symbols  .  Not good !

I talked to these guys , at first , asking them to hold the volume down . No dice . I asked Fleiss to chain up his lot . No dice . Fleiss wasn’t there at night , by the way , to experience  the noise . I tried to communicate the problem to him ; tried to politely express my frustration . Maybe he would chain the lot and stop the problem ?  No dice .

I called the police , of course . Over several months I called several times . Trespassing . Noise violations . Hollywood cops —— they never came out . Not once . Never .

I used to go out in the morning and paint over the graffitti on the doctor’s wall . Fleiss had lost his good reputation with me .

Several months later the Armenians vanished . There are bigger and better  parking lots in the city , after all . Maybe the expanding gang  had outgrown the little Fleiss lot . Who knows  . Maybe they all moved to Glendale .

Fleiss is still there . I got out . After I moved out of the house the neighborhood got super cool , so cool I think I wouldn’t really like to live there anymore anyway .

I was walking in the alley yesterday when I passed a low concrete wall and a fence blocking a parking lot of a veterinarian’s office . All those forgotten old Hollywood memories swamped my thoughts for a moment or two again . Funny how a mind works .

I haven’t been walking the local alleys recently . I decided to get back to it yesterday , so I hit the road . I mean I hit the alley .

There are plenty of places I wouldn’t walk alleys . You know , the places that are dirty and dangerous . I’m not engaged in any social science research requiring me to take risks . I’m not interested in interacting with derelicts , druggies , robbers , thugs , hookers , or wandering hooligans as I stroll along  . The  worst I’ve encountered in Arcadia are madly active  clucking squirrels and an occasional skittering raccoon , their long sharp nails scratching along concrete curbs in hasty retreat . Well , two or three times  lost bears , also , come down from the nearby hills . They  are most likely  looking for a hot tub ( local bears love hot tubs ! ) or dog food  hors d’oeuvres . The bears are usually wise enough , or fastidious enough , though , to stay out of the alleys  and to stick to the roads .

I noticed , in a few spots along our alleys , someone has planted flowers . For me and other alley walkers ? How nice !   Usually ,  the alley  plantings are desperate and lonely hobo plants , able to get by without much care or affection , with food and drink  coming only intermittently .  Some of them show it , clearly barely surviving ,  and others  maintain a respectability  front ; they  manage to hide any outward  effects of destitution or dereliction .

Generally , the Arcadia alleys , so far , are still navigable .  Trash barrels and dumpsters still line up every day , waiting for their weekly visit from the grumbling trash truck . Everything seems in order in this alley world . No mess ; no stress . Sure , there’s a little neglect evident here and there . Let’s mark that down as a bonus , a functional trade off , the price of some extra privacy and independence , an  acceptable cost of being left in peace .

In Cambria , California , there is an  odd house upon a hill near town . It’s called Nitt Witt Ridge .

Arthur Beal bought the hillside in 1928 and began building his house . Beal was the garbage collector in Cambria in the 1940s and 1950s and used some of the collection to construct the house on  Nitt Witt Ridge . 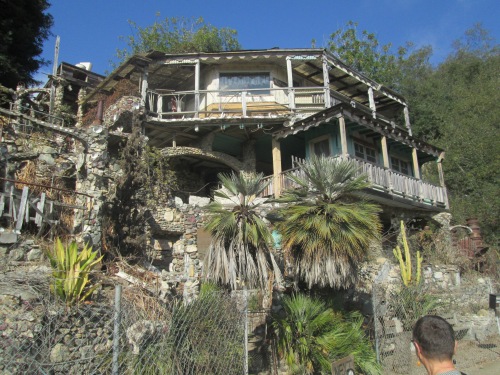 I asked three locals for directions to the Nitt Witt house . I knew that it is  close to town ; just up a hill . None of them knew just where it was . One guy pointed me in the opposite direction , although he knew , at least , that  it was on a hill . Wrong hill .  Another said he and his wife had recently moved to Cambria , only a few months ago , and they didn’t know many of the local sites . No , they weren’t just putting us on . I think it’s typical of locals everywhere often not  knowing the local places of interest . They’re not tourists , after all  ; they live there . Why should they pay attention to tourist spots ?

But Ada and I  wandered around hilly tree -lined streets for a few minutes until we found it . 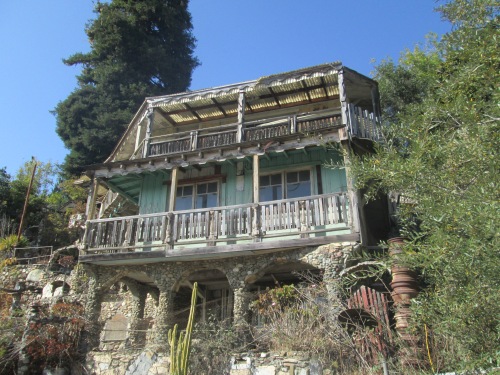 Creativity . Ain’t it great ! Someone with an idea who makes it happen ! Beal was called Der Tinkerpaw .

The Nitt Witt House is for sale . It could be yours !

i Pads for everyone

I am reblogging this post because it has now been revealed that the LAUSD  made a three year contract for  iPad software , but that every year thereafter the District will have to pay about $60 million for the software . The three year clock is already running  despite the fact that the software is still a work-in-progress and not complete . The $60 mil has not been budgeted . This significant bit of info was just revealed . The District administrators have been keeping it a secret , it seems .

The L.A. Times published today  my letter about this latest information. They edited my letter , however . They used the word “snafu” to describe the mess , as if it were my description . I never use the word “snafu” . I have a good mind to write the Times about that .

have been reading about the Los Angeles Unified School District’s plan to equip every one of their students with an Apple  i Pad . The Los Angeles Times  is continuing to beat this dying  horse story — another critical story today .

A few months ago the Times  was praising the i Pad project . On the front page was a large photo of two young girls , huge smiles on their faces , holding an i Pad . Oh , the Times said , now poor children would have the same access to new technology as rich children !  Finally ! Look at the smiles on their faces !  John Deasy , the LAUSD Superintendent is a miracle worker ! He was the one who pushed the project through despite strong opposition .

Some of the first opposition  came from those who objected to school building funds being used for i Pads . Voters in L. A. had voted favorably for a bond measure to raise school building funds in the face of deteriorating school buildings . Now , a $ billion or so of those funds would be diverted to buy i Pads . Oh , but Apple would offer a rebate on their devices ! Such a deal !

I ran this plan past my friend Dan , a retired LAUSD  assistant principal . What do you think , Dan ?  He laughed . It was one of those rude , disparaging , all -hope-is-lost laughs .  His laugh said everything that needed to be said . But , Dan added , ” Didn’t they ask any teacher or administrator at any school site ? ”  Apparently not .

Now the  tune-changed Times  is merciless in their brow-beating critical coverage of the i Pad project .

Then it was discovered that , to use the devices effectively for educational purposes , keyboards would have to be acquired . No keyboards had been budgeted for , of course . The Superintendent said keyboards  would not necessarily be needed even while the testing company providing the on-line tests was saying , oh yeah , they are if students are to take the tests .

The public was told that parents would have to pay for broken or lost i Pads . Dan and I laughed about that one , too . Maybe scoffed is a better description of our reaction . Schools can’t even force parents to pay for lost textbooks .

Deasy faced so much opposition almost immediately that he began to backpedal ; but he continued to declare that the ” rollout ” of the i Pads was a great success — a greater success than even he had envisioned . But there was a possibility that the project , because of all the nay-sayers , might have to be delayed awhile . Maybe only some of the schools would get the i Pads immediately .

Apple’s deal with the District provided the i Pads at the price of $670 each , but only if all 520,000 devices were bought as a batch all at once . If fewer were bought now , then the price on each device rises $100 . And LAUSD had still to find money for keyboards . And locking carts on which to store the iPads . And training for teachers and parents . And……………..

And LAUSD had no plan whatsoever for lost and broken or stolen  i Pads . They’d work that out later , they said . But Apple would pay for the first 5% of losses , they said , instead of making a plan .

And the software purchased for the i Pads has not been fully developed quite yet . Schools were told to use sample lessons while the actual program was being developed . Don’t worry . Don’t worry . By the end of the year it would all be done .

But , of course , what happens when the software contract runs out in three years ?  How will a renewed contract be funded ? Who knows ?  The school district response was that they have contracted only with Apple , not with the software guys .

O.K. , then too, so what happens when the i Pads wear out ? They have a three- year predicted life span. Where does the money come from then to replace them ?  No one knows . No plan .

And , of course , not all schools and not all homes are ready for high speed  internet . Money needs to be provided for infra-structure . No budget for that ?

And why not, instead of i Pads ,  more inexpensive laptops ? Was that idea considered ? And why weren’t these various  problems anticipated and planned for , or cheaper options considered ?

Wow ?   iPads for everyone !  Welcome to the world of modern technology , kids !

I understand Deasy and the school board , I think . Rather than bash them , however ,   I want to put forth the reflection that up-to-date technology is attractive , the idea of acquiring it is intoxicating , but let’s not ingest too much of the intoxicant ,  not  get too close to the fumes  when we  don’t really know what we’re doing . Maybe , instead , be cautious ; take a more sober approach before committing hard-earned money in an ignorant glee spree for shiny technology .

Educated ones can control the ignorant and can take them for expensive joy rides . Pity I should have to tell educators that !