There he is again , crashed out on the neighbor’s lawn . His sleigh is there , too , waiting . 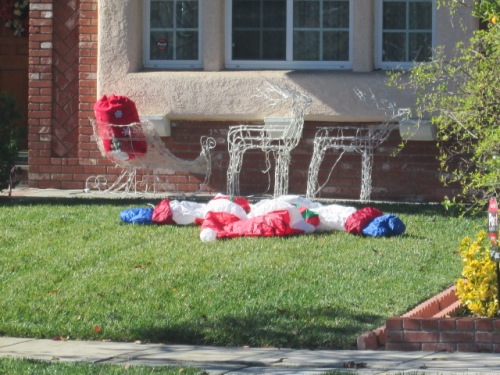 A sleigh in the Los Angeles area ? Come on ! Sure , there’s been a little snow up in the mountains . But , down here in what they call ‘the L.A. basin’  we’ve only had three inches of rain this year and , believe it or not , no snow at all. Maybe we’ll get another quarter inch of rain before Christmas . Big deal , eh ?

I wrote a blog post about this lost Santa and sleigh  last Christmas . Deflated Santa . And there he is over there again . Go figure . Maybe he didn’t have the same sleigh  last year . I think I remember the reindeer . Or , at least one . But , maybe I’m thinking of the reindeer over on Madison Ave. , or on some of those decorated streets at Hastings Ranch . Somewhere . Those reindeer show up all around Arcadia and surrounding cities this time of year , those bony white skeletal figures . They’re lethargic too , maybe drugged-up , not like wild reindeer in more northern climes , from what I’ve heard . Some of them nod their heads , but that’s about it .

These white skeletal things around town  light up , too , at night . I’m pretty sure they’re not reindeer from the wild reaches of  Lappland , or the North Pole , or wherever else  hearty reindeer roam . These guys have to be impostors , hired for the season , mule deer maybe , in their slick white get-ups . Maybe they’re not even deer of any kind . I wouldn’t be surprised .

Christmas  , if we face the truth , if we talk turkey , if we put all our cards on the table , is a season full of phonies . Have you seen all of the fake Santas , for example ?  How about the lights made to look like snow hanging from houses ?  Fake candy canes all over the place ?  And snowless plastic snowmen ! And , how about phony sales scams and phony charities ?

I get dozens of calls every day from solicitors . I’m not saying all of them are scams . Not all of them .  I guess they want to take advantage of the Christmas spirit . I guess they figure people are in the mood for giving and , so , they should strike while the fire is hot   [ strike while the fire is hot ? What the hell is that ? I shouldn’t even put it in here , probably .  It doesn’t really fit ,  not very well  anyway. Besides , I’m not sure just what it means . Blacksmithing saying ?  ] .

Ada spoke to some phone solicitor today , a charity for ”  Indian relief ” .   I usually don’t pick up the phone . If I do , then I immediately hang up when there’s  that five second delay , sometimes filled with other boiler room callers’ voices in the background , followed by a Mr. Hennersley ?Hennessy ? How are you today ?   But  Ada put the guy on the spot , as much as you can put someone on the other end of a phone call on any spot , asking him detailed questions about the charity , what exactly was the charity’s name , what percentage of every donated dollar goes to administration , what’s  the specific goal of the outfit ? , etc.  . She’d check it out , Ada assured him , but she insisted that she wasn’t interested in his sales talk over the phone . I heard her repeat that a few times . This cat evidently wanted to talk , to persuade , and he  kept talking , confident in his imagined powers of  persuasiveness , I suppose . Thought he had a live one on the end of his line , no doubt  , the poor misguided cluck  .

Anyway , I should go over and see if those fake reindeer need a bite of food . I don’t know what reindeer eat , but if they’re hungry enough I guess they’ll eat whatever .  They may be fakes , but my neighbor Don says  Ever-body just wants to get by . They’re tryin’ .  I give ’em credit for that . Don was referring to phone solicitors . He gets just as many of those calls as I do . I just hang up on ’em ,  he says , though , despite his expression of compassion .

I suppose Don has a point . Ever-body’s just trying to get by . Even Santas don’t have to fit the traditional stereotyped mold , do they ? You know : the Jolly  Old Elf ? He can sleep wherever and whenever he wants , I think , this deflated  Santa ,  if the neighbor whose lawn he’s on doesn’t mind , as long as Santy  gets those skinny reindeer in gear in a few days and gets up to all those rooftops so he can climb   down all  those chimneys .