On sale on line : Amazon.com

Initially , as my eyes and attention swam slowly into the novel , I was wary . Wary of the names of the characters . Salvador Persequi is our guide , the first person narrator throughout the novel journey . Known as Salty , or Sal , to his friends who habitate the made-up town of Refugio , on the southern California coast , Persequi has just returned from the war . 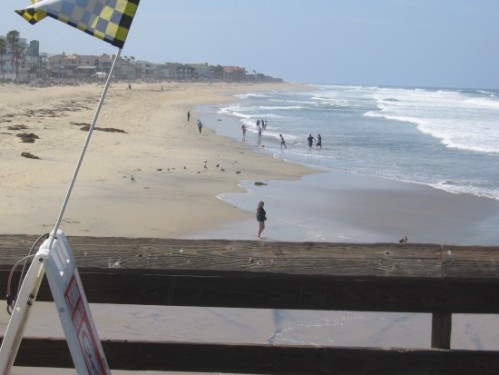 Our narrator , Salty Persequi , has written his girl a series of letters from the war zone . The book begins with one of the  letters : Separation .  He is given a coming home party by his friends , who include  Puck Malone and Henry Killknot . Salty’s girl , Penina Seablouse , is there , of course , too . Two fellow war vets show up for a few drinks but they don’t discuss the war with Salty . Penina’s Letters is not a war story . Is it a love story ?

The main thing that  Salvador Persequi seems to want to do, freshly home from the war ,  is surf . Refugio ( his refuge ? )  is a surfer’s town . His friend Puck now owns a surfboard shop where Salty sleeps and helps out shaping short boards as he reflects on his life . At one point our soldier announces that he’s going off to live on his surfboard .

The book is an easy read . The language used is poetic and powerful and carries a reader along as if pulled continuosly over a beautiful verbal sea . Before you know it you’ve come to the end and you feel that you’ve had a good ride .

I’m glad I read the book . I’d recommend it to most people , to any good reader , to any lover of literature . It’s not pretentious at all , though ,  as I initially feared that it might be . Whose world , after all , is populated by people with names like those ? Are we to read something in to the name Puck Malone ? Is he a Shakespeare’s Puck , or the Irish Pooka ?  To the name Killknot , who never went to war ? What about the last names Seablouse , or Buckett , or Crux, or Chippy , or Wormth . Or Beau Bob Eyren , AKA Bubo Eyren ,  the one who didn’t make it home yet from the war ?

Oh , I should tell you that at the welcome home party thrown by Puck and the others , Penina’s letters are passed around and read aloud in drunken frolic . Salty , the returned soldier , the letter writer , stays silent ; then he recites a satirical impromptu poem . Penina leaves the room . Salty suspects that Puck has slept with Penina and , so , had access to the letters . Did she share them with Puck ?

Salty takes the pack of letters and wanders  down to the Refugio jetty where he  flings them , one by one , into the surf . Are they his letters to do that , or are they his girl’s ? Is she his girl ? She admits sleeping with Puck , but she says it only happened once . Puck , too , admits to only once . Half way through the book , though , Penina tells Persequi :

” Love isn’t something you make, ” Penina said . ” I tried making love with Puck Malone, and it was like manufacturing gadgets, like I was moving down an assembly line . Giggle here , giggle there , turn this , twist that ,and wham, bam , thank you mam, every ride the same . Is that what surfing is like ? “

“Enough . Wait , once ? And did you say , every ride ? How many Penina waves did Puck catch while I was away ?

Our soldier boy narrator , nevertheless, continues to work for Puck Malone , and to sleep at his shop while continuing his quest to recapture the heart of Penina Seablouse , to sleep with her , and to surf . He writes her letters , more journalistic than romantic in tone and content .

Later in the story a neighbor blurts out something about ” Penina’s boyfriend “.

Persequi assumes that she means Puck . ” No , Henry , ” the woman says . Henry Killknot ,she means , the weird friend who is  now a hot-shot lawyer , who lives in Refugio but drives his expensive car to his downtown Los Angeles office .

One of the few characters mentioned in the story with a sensible , common-sounding name , Sergeant First Class Williams , tells our soldier narrator : ” Persequi , I’m worried about you , son . You’re a dreamer thinks he’s a thinker. ” [page 121] . Penina tells him  : ” Think ? That’s your problem . You think too much . ”

Can we rely on Persequi to give us the facts ?  Or , is he an unreliable narrator spinning his self-reflections into a bogus tale . ” I’m thinking of turning my new letters to you into a book ,” he tells Penina [page 81] . ” What do you think about that idea ? ”

The one time our narrator is overcome with emotion is at The Sweet End joint , where he waits at a table with Penina , who is scheduled to perform a few songs  . A poet is on stage reciting a few profanity-laced pieces and two literature professors , friends and teachers of Penina  , are sitting at the table , too  . Persequi begins an emotional story of the war , of seeing a friend’s legs blown off , of one severed leg of his hanging from a tree , of the soldier sitting on the stumps asking Salty to help him . Penina urges Persequi to come outside with her . He hasn’t realized how loud he was getting . [ ” What do you mean I was yelling ? I was just telling them a story “.]    He has interrupted the poet’s profane poetry onstage . The poet comes over to the table afterward and he and Salty speak . The two professors were cowed :

” They sat quietly by , smiling politely at Big Poet’s antics , unsure how to handle a live poet loose from their library . ”

A while later Salty tells Penina that he made the whole story up . She doesn’t know what to believe . So , in the end , I didn’t know what to believe either . Can this guy relate only through letters ?  Is he stuck with some unusual type of PTSD ? Is the face-to-face with Penina not satisfying his needs ?  Has he squelched his inner demons , momentarily at least , by poetic self-reflection , by hooking in to Ezra Pound , T.S Eliot , and Yeats , by sticking with living the life of a dreamer , by writing and re-writing his experiences instead of fully living them ?

There is hope for the man , though , although I won’t give the evidence away here . And , by the way , you’ll have to find it for yourself as you read the book . Joe Linker floods the pages with wonderful writing , but , I think ,  leaves it to the reader to find the meaning .   There’s nothing cliched , over done , or dull in the novel . For those of you who love the English language , you’ll love this exquisite work , Penina’s Letters , I think . Dive right in and have a fun ride . Surf’s up .