I had the fleeting thought to title this post : Why My Dentist Doesn’t Talk to Me Anymore .  I thought better of it , though , and went with a more generic title .

Once I got a comment , years ago , after one of my posts , where the commenter suggested , rather forcefully , that I construct better titles if I intended to attract more readers . I considered this clearly sage advice  seriously for a few seconds before I discarded it as if it were a wonderful , beautiful , comfortable sock . One sock . Can’t do much with one sock , footwise , I mean .

Well , I was thinking of dentists today , for no apparent reason , so I decided to write a post about dentists .

My dentist died a few years ago . He taught dentistry at USC , so I figured he must know what he’s doing . Ada took a few years to warm up to him . He was our dentist for about fifteen years or so .  But , then he died . That’s why he doesn’t talk to me anymore .

He did like to talk , though . Maybe that’s a prerequisite for dental school . Maybe a study should be made , or maybe a Congressional Committee should convene .  Why do dentists insist on holding conversations with poor suckers who have their mouths wide open while , at the same time ,  excruciatingly sharp implements are poking , probing ,  and scraping around one’s  gums and teeth and , unavoidably , interfering with the probee’s , pokee’s , conversation ? A captive audience  for sure !

My dentist talked sports and politics . I don’t talk sports , and I don’t talk politics with fanatics . He was a fanatic . It took him several years to realize that I don’t follow sports , couldn’t  really care less where the assistant USC football coach went to college or how anyone’s batting average compares to last year’s or whether this head coach should be fired but that one should definitely be kept around for a few more seasons even though he’s talking about retirement  . And I don’t care at all how smart Bill O’Reilly is or isn’t , or where he went to college .

My new dentist , the one who took over the other one’s practice , I think is highly qualified . He worked on my teeth , too , with no pain or agony . Mostly I go in only for routine maintenance , change the oil and rotate the tires kind of stuff .

Last visit , though , I was pawned off to an assistant . She was young and perky and very concerned about my bleeding gums . Had nothing to do with her poking them for five minutes and , thus , drawing blood . I’ll bleed profusely these days , for some reason , even if someone near me  appears to have a sharp wit . I come in from the garden with lines of dried blood up and down my arms ; but when I wash it off there’s no wound . Explain that . Anyway ,  that’s what she assured me , that my gums were bleeding but not due to her stabbing them repeatedly ,  and that  I should consider special  procedures , if I at all wanted to keep my teeth , and that I should  have at least this particular lesser procedure done immediately , now  . And I definitely should come in for a third visit every year, she insisted   ( even though my insurance covers only two )  .

I was fool enough to be a little intimidated  with the scare tactics , so I paid a couple of hundred dollars extra for some version of a deep cleaning . My situation  was a little like when a mechanic lays on the scare tactic about what the car needs . What does the average person know ? Who to believe , me or that lying horse ( old joke : “I don’t have your horse ,” just as the stolen horse hidden in the barn whinnies . ” Who you gonna believe , me or that lying horse !” ) .

I did my homework later ;  too late , of course . Shouldn’t have fallen for it , to make a long story short . And the third visit suggestion  was absolutely a non- starter . I think dear dentist is trying to find ways to pay for his fancy new office and salesgirl assistant is part of the plan . Oh , yeah , he moved into a fancy new building near Santa Anita Racetrack . 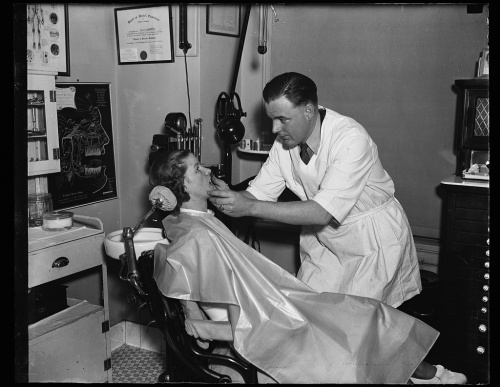 On top of that , the dentist himself  came in to say hello , probably so he could charge for a personal visit , or else because of some legal requirement . The salesgirl assistant probably wasn’t licensed in the right way ,  I’m guessing . He asked me if I’d found the office with no problem , as if I were a new patient ;  didn’t recognize me , despite the fact that  this was my fourth or fifth visit with him  . He had recently installed a crown , too . So , hey , I had to inform him that I wasn’t a new patient . That , somehow , was a bit disheartening  , to think that his friendly manner must be  just , actually , for show . He should have looked at his notes before he walked in . Would have been more professional .

And it’s going to be either me or the assistant , I think . Maybe she’ll be gone by the time of my next visit .  I suspect , however , that I’ll be  once again  hunting for a competent , painless , friendly dentist . I might ask what the topics of dentist conversation will be , too , before I sign up .